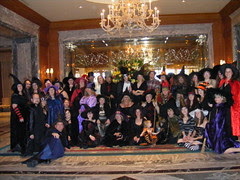 Witches High Tea
Originally uploaded by Gwen Wolfrose
Today was The Utah Black Hat Society's Third Annual Witches High Tea event. It was held at the Grand America Hotel in down town Salt Lake City this afternoon from 2pm till 5pm. Don't ever tell any of the fifty attendees that real witches don't wear pointy hats because obviously, they do.

The Black Hat Society is a pagan social group founded in 2006 by Chrissy Johnson, a Salt Lake City denizen. The high tea event held each year in October is the pinnacle event for the society where one gets to dress to the nines in their finest witch attire, don their best pointy hat and enjoy a grand afternoon of tea and conversation. The society also hosts an afternoon tea in the spring and have been seen caroling on the streets of Salt Lake in December for the annual Witches Wassail. Chrissy, along with TaMara and Kayote, the organizers of the society's events, have stated that early next summer they intend to add another exciting event to the society's calendar.